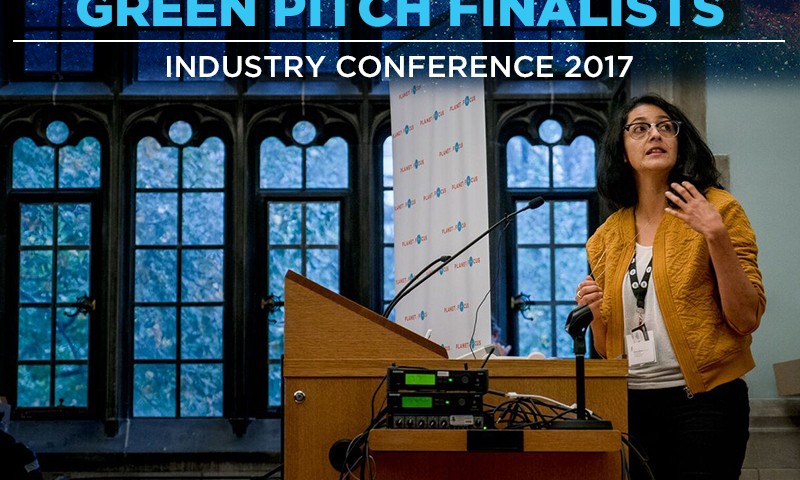 A highlight of the annual Industry Conference at Planet in Focus is the Green Pitch. Six selected filmmakers pitch their film idea to a panel of industry judges and in front of the conference audience. The winner receives a prize valued at over $35,000 in services & cash to put toward the production of their project provided by Ontario film production suppliers.

The Green Pitch finalists for 2017 have been selected and are listed below. Join us at Industry Conference on Friday, October 20th to see them pitch their ideas!

Babe, I Hate to Go

Project description: The relationships between a family in rural Jamaica are put to the test after the patriarch and only breadwinner, a migrant worker, learns he has cancer. An intimate look at one of the thousands of Jamaican families that rely on migrant labour, Babe, I Hate to Go shows the human cost of an economic system that forces families apart in order to survive.

A filmmaker and producer based in Toronto, Andrew Moir makes intimate, observational documentaries. His films include Uprooted (2011), Just as I Remember (2013), and Babe, I Hate to Go (2017). His work has screened at festivals that include Hot Docs, Sheffield Doc/Fest and DOC NYC. He is currently in production on his first feature-length documentary.

Sherien Barsoum is a Toronto-based filmmaker and impact producer. Her first feature, Colour Me (2011), was a bold exploration of black identity narratives. After producing the film, Sherien campaigned 50+ youth screenings, a partnership with the Toronto District School Board, and self-distributed an educational version to 100+ schools and non-profit organizations. Most recently Sherien produced Babe, I Hate To Go – a CBC short film exploring the life of a Jamaican migrant worker. Sherien was the story consultant on the Oscar shortlisted short Frame 394 (HotDocs 2016) – a provocative look at the police shooting death of Walter Scott, and the co-producer of the award-winning feature House of Z. When she’s not making and sharing films, Sherien programs Reelworld – a social impact film festival in Toronto.

*
Director / Producer: Celeste Koon
*
Project Description: Searching For Baby Glacier is a 60 minute documentary about ice, climate, and history. In 1959 my grandfather was part of the first ever scientific expedition to Axel Heiberg Island, Nunavut. To commemorate the birth of my mother earlier that year, he named the small glacier he discovered Baby Glacier. This is my quest to follow in his footsteps to find it, while at the same time discovering my own past and learning about Canada’s far north and how our changing climate is affecting this precious landscape.
*
Celeste is a fun, adventurous, eco-conscious filmmaker. She has written, directed, and produced, a number of short narrative films which have gotten into festivals across the globe from Toronto, to France, and even to Iran! She was also commissioned to create two short segments for PBS’s Sesame Street!  Celeste is a natural storyteller with a a unique visual style. She balances making her own films with crewing in the art department as a graphics and motion graphics designer. Growing up, Celeste was torn between becoming a filmmaker and going into environmental sciences; she chose film with the goal of making films that would allow her to share her love of the outdoors and the need to protect Canada’s spectacular natural landscapes.

*
Director: Scott Dobson
Producers: Scott Dobson, Jono Nemethy
*
Project description: Fight To Repair explores the growing resistance by hack-tivists and environmentalists to corporate attempts to turn consumers into “digital serfs”.
*
Scott Dobson is an award winning Producer/Director with over 25 years experience in documentary filmmaking. Most recently he directed Puffin Patrol and Carpe Diem, for the Canadian Broadcasting Corporation’s The Nature of Things. In 2016 he was story editor for Viceland’s new documentary series Payday. In 2012 he directed Church Of Elvis; a 3-hour look the spiritual world of Elvis Presley, and its sister show, Elvis In Love. Prior, he produced the very successful spam: The Documentary for CBC Newsworld, which was broadcast around the world. As Producer/Director he created the award-winning Keep On Shucking documentary for Food TV Canada/US, produced many projects for the famed Second City in Toronto and Chicago; from TV spots, to documentaries to the critically acclaimed re-release of the beloved SCTV TV series onto DVD for the first time; a massive project taking 4 years to complete. He also produced 2 series exploring modern Canadian Jazz and Blues, the latter was nominated for the prestigious WC Handy Award by the Memphis Blues Society.

Project description: Anne Dagg returns to Africa 50+ years after her trailblazing journey to study giraffes – giving us an intimate window into the past, along with a firsthand view of giraffes today.

Joanne Jackson is an award-winning producer who has been the driving force behind many compelling, thought-provoking documentaries and programs for over twenty years. She worked as an in-house producer and as a production executive for YTV, WTN and Discovery. Her productions have garnered eight Gemini and one CSA nomination. Joanne’s work in feature documentary film include The Messenger (2015), The Big Wait (2010) and Long Haul and Big Hearts (2008). The Messenger, a highly acclaimed film that unravels the mystery surrounding the decline of migratory songbirds, is an international Canada/France co-production that was released theatrically in the U.S. and Canada.

*
Director: Sagi Kahane-Rapport
Producer: Dylan Sher
*
Project description: Before the Plate is a feature length documentary that traces a plate of food and its specific ingredients backwards from restaurant to soil. Following John Horne, the Head Chef of the restaurant Canoe, the film seeks to inform and educate audiences about the realities of modern agriculture, and to give insight on the production processes that bring our food from farm to table.
*
Sagi Kahane-Rapport is a young filmmaker from Toronto, Canada. Working as a director, editor, and animator, Sagi‘s work has spanned from national advertisement campaigns for major brands to  feature documentaries. Sagi‘s work has been received with success in a variety of festivals, and he is constantly looking for new creative boundaries to push.

Director: Exan Auyoung
Producer: Joanne Jackson
*
Project description: A disturbing spike in birth defects in a Hawaiian community has brave mothers and civic leaders fighting back against covert GMO/pesticide testing near their homes by the world’s leading biotech companies. This film follows their struggle to defend their rights and stop the ultimate poisoning of the global food system.
Bio: Exan Auyong is an award-winning journalist, researcher, writer, director and producer.  Her portfolio includes working as an investigative producer for ABC News and Good Morning America as well as National Geographic International’s award-winning documentary Series, Air Crash Investigation.. As Bravo Television’s Political and Current Affairs specialist, she directed and produced a wide range of short form documentaries highlighting social injustices and the violation of human rights around the world. Her work with the environment and the anti-GMO movement encompasses Get Dirty, an urban farming series which she created, directed and produced.

The Planet in Focus  Industry Conference brings together key members of the Canadian film community – including filmmakers, funders, distributors, and broadcasters – for an intensive day of networking and professional development.