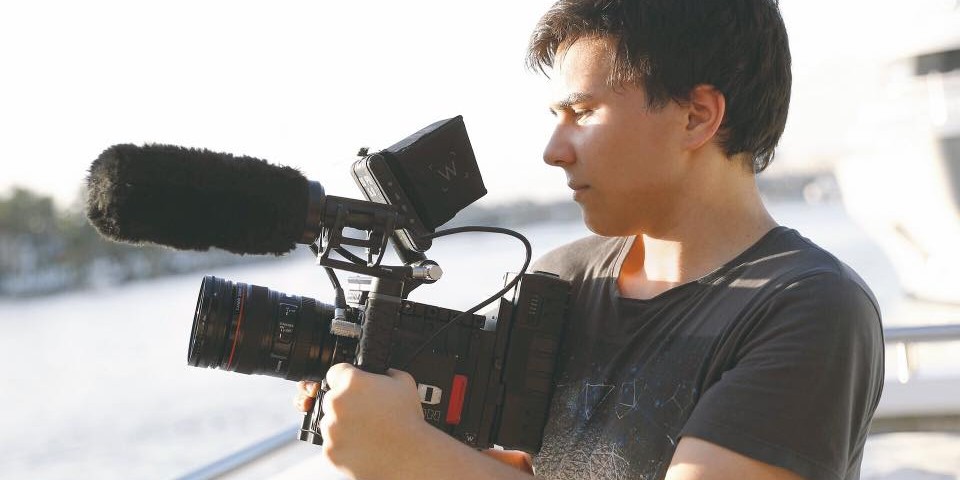 Jonah Bryson, 17, is the recipient of the inaugural Planet in Focus Rob Stewart Youth Eco-Hero Award. This award was created to honour the legacy of Canadian filmmaker, activist, and educator Rob Stewart. A friend and colleague of Stewart, Bryson shares with us the significance of receiving this award below.

If it provides any solace, please be assured that Rob had a huge effect in his life. Not only educating large numbers of people and saving countless lives of sharks, he has inspired a whole generation of young people, many of whom will go on and amplify Rob’s work. – David Suzuki

I cannot begin to express how honoured I feel to be receiving the inaugural Rob Stewart Youth Eco-Hero Award from Planet In Focus Film Festival this year. Let me tell you why this award is so meaningful to me on a deeply personal level.

Rob was one of my best friends. We had the chance to collaborate and co-direct a film together called The Fight For Bala. Rob taught me so much about the film industry and he inspired me to be a more positive, optimistic, and outgoing individual. He was a dear friend, an amazing mentor, and a hero.

The first time I met Rob was up at his cottage in Muskoka. We had previously spoken over email, but to suddenly have the opportunity to spend a few days with him up north was amazing! After that we became good friends. We inspired each other and developed a unique friendship – a friendship across two generations. That, in itself, is something I’ll forever be thankful for.

I got a text from him back in 2014 saying something along the lines of “Hey buddy! I’m getting an Eco-Hero award at Planet in Focus Film Festival! Wanna come with me?” Of course I replied “Yes!” That was when he received his Planet In Focus International Eco-Hero Award. We had a lovely dinner afterwards to celebrate the occasion with his family and I just remember thinking how grateful I was to know Robbie. I dreamed of getting to collaborate with him as a kid, and suddenly there I was, hanging out with him and his family at dinner, after having made a film together. It felt magical!

So, now, after having spent so much time with Robbie (and following his terribly sad and tragic passing), to be receiving an Eco-Hero Award myself, in Rob’s honour, is surreal. Sadly I can’t invite him to my Eco-Hero Award ceremony, but his legacy is more alive than ever – and I know he’ll be there, in the theatre, with us.

This award marks the second time Planet In Focus Film Festival has supported me in my work. This time last year I had the great opportunity to join nine other inspiring young people at a round table discussion with David Suzuki, organized by Planet In Focus. We discussed environmental issues and the power youth have in tackling them for future generations. David Suzuki had always been a personal hero of mine, and it was wonderful to be a part of that even with him.

Thank you so much, Planet In Focus, for supporting youth to do this important work for the planet and for this incredible award! It truly means the world to me. And Rob, and the entire Stewart family, thank you so much from the bottom of my heart.

Jonah Bryson is a 17-year-old French-American award-winning film director and musician with a passion for entertainment to make the world a better place. After receiving a Best Emerging Artist award sponsored by Prince Albert II Of Monaco at the age of 14, Jonah co-directed The Fight for Bala with Rob Stewart (Sharkwater). Currently directing a feature film with ​Fabien Cousteau, a famed explorer and grandson of Jacques-Yves Cousteau, Bryson is also a certified scuba diver, contributes to The Huffington Post, speaks frequently at events – including the Canada 150 & Me Vancouver conference with David Suzuki, and has collaborated with the United Nations and Taylor Swift’s band on conservation initiatives. He is additionally working on another documentary featuring cast and crew from Star Wars, Indiana Jones, E.T., Jaws, Harry Potter, Jurassic Park, Home Alone, Schindler’s List, and Superman.

Planet in Focus Film Festival will honour the legacy of Canadian filmmaker, activist, and educator Rob Stewart with a brand new Eco-Hero Award in his name. Bryson, who was mentored by Stewart, becomes the first-ever recipient of the award at 17. Read more.

THANK YOU to Esri Canada and Pure + Simple for generously supporting the Planet in Focus Eco-Hero Awards!