Young people have everything to lose - so don't expect them to back down on the fight against Climate Change.

Last month, I had the honour of participating in a roundtable discussion with 9 other youth environmentalists and David Suzuki. Less than a week afterwards, I was one of 99 youth arrested on Parliament Hill calling on Trudeau to reject the Kinder Morgan pipeline.

As young people, we are often berated for being apathetic, but the roundtable discussion was a welcome reminder that we are far from it! All under 25 years old, the ten participants had the opportunity to share their stories of creating change. From working in sustainable food practices, to creating art in activism, to fighting for climate justice, youth are highly engaged and determined to make the world a better place.

It’s not hard to see why. As David Suzuki put it, “young people have everything to lose”. Youth were not born into the same reality as our parents’ generation. We were born into the reality of climate change and neoliberalism: a world where politicians put short-term profits over justice, and corporations over people. We have spent our entire lives fighting for a safe and livable future, only to be met with indifference and false solutions.

This leads me to the action on Parliament Hill. Youth are engaged in politics; the problem is politicians are not listening. Civil disobedience is nobody’s first choice: we all want to be able to sign a petition or attend a town hall and have that lead to the change we want, but the reality is, taking the polite route isn’t enough. We have tried everything and still, the Canadian government is pushing for pipelines and tar sands expansion, violating Indigenous rights and frying the planet in the process. That’s why on October 24th, I was ready to get arrested to stop the Kinder Morgan pipeline. 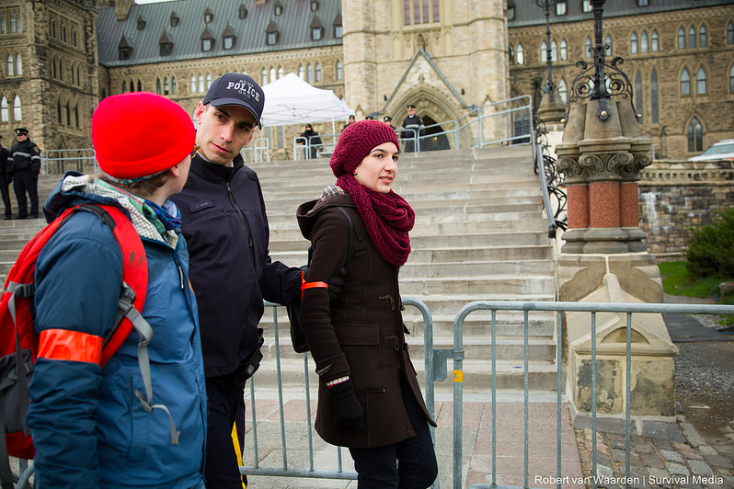 The Climate 101 action on October 24th was a demonstration of youth frustration with politics as usual, and it was also a demonstration of our political power. Last election, 45% of people ages 18-25 voted Liberal, meaning that my generation is largely responsible for the Liberal majority. That same demographic, spanning all the way up to 35, is overwhelmingly opposed to pipelines. Keep in mind, these studies focus on youth 18 and over, but I met a lot of talented teens at the roundtable who are not yet old enough to vote. Just imagine what the political landscape will be when all those frustrated high schoolers turn 18!

All this to say, it looks like our Minister of Youth Justin Trudeau has a youth problem. If he wants our support next election, he needs to reject the Kinder Morgan pipeline. He has a clear choice, but regardless of his decision, I know that young people are not going to give up the fight. We are in this for life, and I believe that we will win.

Amanda grew up hearing about climate change from her parents. She has been involved in environmental initiatives from a young age, but it wasn’t until joining her campus fossil fuel divestment campaign in 2014 that she learned to approach climate activism from a social justice perspective. Working on divestment, she has had the opportunity to engage with related social issues including Indigenous rights, anti-racism, and feminist activism.

Amanda spent last summer working for 350.org on the People’s Climate Plan, a national campaign to engage people in the federal climate town halls and demand ambitious climate action in the government’s forthcoming national climate strategy. Amanda worked with youth across the country on Climate101, a civil disobedience action on October 24th to call on Trudeau to reject the Kinder Morgan pipeline.