Engaging the professional community of Canadian filmmakers, producers and broadcasters. Our goal is to provide stimulating, up-to-date information and access to the world of environmental films and funding. Professional modules include the Master Class, networking opportunities, the Green Pitch competition and DocBOX Toolkit sessions filled with an outstanding line up of VIP guests.

Live at the Centre for Social Innovation, 192 Spadina Ave, Toronto

Doors open at 10am, join us for coffee and a light snack ahead of the first panel event!

This session focuses on some of the key relationships necessary to get your film funded, produced & sold. Funding agency reps discuss the latest trends in financing, co-productions, distribution and the future of branded content.

Each year, Planet in Focus hosts a Master Class workshop with an established filmmaker and PiF alumnus. This year’s workshop will be with Canadian filmmaker Cat Mills. 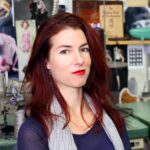 Cat Mills is an award winning filmmaker with a passion for the unconventional. Her 2017 film Big Men, Small Dogs for CBC Short Docs went viral with over a million views in the first few weeks of its release. She is the winner of the 2016 and the 2020 Hot Docs Short Pitch Competition, and multiple festival awards. Her films include Me, Mahmoud and the Mint Plant, The Billboard Squad, FIXED! Biker Bob’s Posthumous Adventure, The Mesdames of Mayhem, and Shelina Stand Up! Her work has appeared on CBC, Bravo, TVO, Al Jazeera, BBC and NBC. Cat is a graduate of the University of British Columbia, holding a BFA in Film Production. She is a fellow of the CFTPA Producers Internships program, the documentary Channel Doc Accelerator Program and the DOC Breakthrough Program. Cat has a passion for stories about community and kindness, and uses humour to challenge our perceptions of the world.

Planet in Focus is proud to be including her latest films The Billboard Squad and Me, Mahmoud and the Mint Plant in the 2022 festival lineup.

The changing landscape of distribution can pose a challenge for filmmakers post-pandemic. Join us as we ask Canadian distributors the tough questions including navigating hybrid festivals, new international strategies and more.

A highlight of Industry Day is the Green Pitch. Five selected filmmakers pitch their film idea to a panel of industry judges and in front of the conference audience. The winner receives a prize valued at $20,000 in services & cash to put toward the production of their project provided by Ontario film production suppliers. See the 2021 Green Pitch winners here.  Applications for the 2022 Green Pitch are due by Friday, October 7, 2022.

Apply to the Green Pitch

Julian Carrington is a freelance writer and film programmer based in Toronto. He has contributed to publications including The Globe & Mail, Indiewire, and Cinema Scope, and, in 2014, served as a programming associate with the Toronto International Film Festival. In 2015, he became manager of the Documentary Organization of Canada’s Festival Concierge initiative, supporting filmmakers in developing distribution and audience engagement strategies.

Lesley Johnson is a director, producer and programmer, based in Toronto and Yellowknife. She studied Film Production in York University’s MFA program, and holds degrees in wildlife and environmental sciences. Before becoming a filmmaker, she worked in community-based research in the Northwest Territories, and on studies chasing after the likes of terns and wolverines. She is the former director and programmer of the Yellowknife International Film Festival, and of a Cinema Politica chapter.

Anna Newallo has three decades of experience in the Film and Television industry. As a Program Consultant at Ontario Creates, her portfolio contains a wide range of programs and initiatives including the Film Fund (Production and Development), Marketing and Distribution Initiative and Industry Development Program. As a producer, her award-winning independent films have played major international festivals, and as a writer, her short stories have appeared in numerous publications. Prior to joining Ontario Creates, she worked on projects for The Disney Channel, CTV, Discovery Channel, CBC, TMN (now Crave), CityTV and BRAVO!

James Luscombe is a Content Analyst in the Feature Film department at Telefilm Canada. Previously he worked as a script analyst for the CFC and The Harold Greenberg Fund, and as Development Executive for Lumanity Films and Shaftesbury Films.

Greg Rubidge started his career at CIBC in commercial banking as an analyst but migrated into entertainment, getting his start in the business at the Canadian Film Centre. He started an online entertainment and Web agency in 1995 and sold it to a US venture firm in 2000. In 2004 he started working in the then nascent world of VOD as Director of New Platforms at Corus Entertainment, launching Treehouse, YTV Anime and The Documentary Channel on Demand. In 2009 he founded Syndicado, a North American film and television distribution company. The company has since become one of the top digital distributors of independent docs, arthouse features and factual TV series, releasing over 5000 hours of programming across the top VOD outlets. In 2016 he co-founded the boutique world sales agency, Syndicado Film Sales, which now boasts a slate of docs that have been in Sundance, TIFF, Tribeca, Locarno, HotDocs and Karlovy Vary.

Kiera Boult is an interdisciplinary artist and administrator with a BFA in Criticism and Curatorial Practice from OCAD University. Boult’s practice is playfully reliant on camp, comedy, and approachability. By using the trope of the therapy booth, she posits the artist as facilitator, opening conversations surrounding race politics, intersectional feminism and relational aesthetics, all the while skeptically addressing issues that surround the role and/or identity of the artist and the institution.